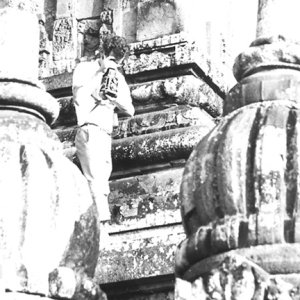 My fellow PCV teacher with the travel photography experience and gear mentor, Elliott Parker, became my good friend and travel bud, and we went on several really memorable trips for our vacations – Java, Bali, and Cambodia being the best.  I had zero travel experience outside of the American West.

The trip to Indonesia was something out of “Year of Living Dangerously”. It was the year of change from Sukarno to Suharto – the Russians were out and the Americans were in. I experienced a clandestine political trip of an unmarked embassy (US) car being hustled off the airport tarmac in a high speed black car parade when we landed, and observed the rusting Russian bombers and fighters being absorbed into the tall grass off the runways, big images to a green traveler. Changing money was done also clandestinely – in an alley for 4 times the bank exchange rate. Unlike Malaysia, the stores were pretty much bare, and we heard of school teachers (like us) being paid in rice. The largest mosque in the world was still in rebar and partial cemented wall status – I never followed up to see if it ever got built.

I liked Jakarta. It had sections that were very deceptively western in appearance. We went by neighborhoods that could have been in the Midwest. Now that I think of it, that was weird. But it was reassuring then in a land of such obvious differences. We met University students who were active in the very dangerous game of protest against the Sukarno regime. The movie mentioned above was very accurate in terms of the overall feel of danger and tenuous alliances then. I had never been in a place with such an array of police, quasi-military and military groups that went about openly with weapons ready to fire. I wondered how anybody could keep the various factions straight.

I had never heard what a 45 caliber pistol shot sounded like, and on a train to Surabaya, I experienced real terror when several loud noises went off, and Elliott immediately dove to the floor to stay low. That was proof to me of his worldly experience.

There’s more to come here, but now I see the value of making daily posts as opposed to a book online.

Chapter One- Peace Corps and Photography.

I was a Peace Corps Volunteer in Malaysia, Project XI, Industrial Arts and Home Economics – we were a group teaching in Secondary Schools in Malaysia, 1966-68. The long flight from San Francisco to Kuala Lumpur made it possible to engage a fellow volunteer -an experienced photographer- in long conversations of camera gear and what I should buy, given my interests – architecture, historical momuments, and the excitement of being somewhere totally new.  I already possesed a Yashica D – the poor man’s Rolliflex. A layover in Hong Kong opened the doors on possibilities and bargains.  In a whirlwind tour, I ended up with an additional medium format camera, but with interchangeable lenses – a Mamiya C33 and 250 mm lens, to bring those portraits and architectural details up close on a medium format negative. I was a black and white devotee. As a nod to my proclivity for 35 mm slide shows, I bought a Miranda G with normal and wide angle lens- a poor man’s Nikon. I subsequently added on to the Mamiya, 105mm for long normal and 65 mm for moderate wide angle. I also bought another Miranda G body and tele zoom. This became my standard travel gear, and I became the Group XI unofficial photographer, loving the ability to have something to do during our group meetings and trips. It was invaluable to me in my personal trips in country and on vacation trips, helping me to focus on the surroundings.

Relaxing in Mazatlan, leads to current thought about relaxing.

So, this was an initial attempt to put images as an important part of copy and thoughts. I’m finding that relaxing is sometimes detrimental to getting things done that I have recalled only after not doing them when time has :run out”. So Relaxing, as good as it is, will sometimes get in the way of the action plan. Creating anxiousness that then needs relaxing from. An endless circle.

This is all developing from attempting to make a blog/post that is relatively easy to do, and at the same time, good to look at.

Mostly easy to do, and artful, otherwise it will die on the vine so much like my latest efforts to be meaningful.

I am hoping that the picture of me being relaxed will appear close to this posting, so that the two can be related. Coming from a publishing design background and hand-done pasteup, I think that it shouldn’t be too hard to assemble a visual copy with illustration with the post. This post.

Have a relaxing day. Leo

Relaxing as part of an active life…